In the early 1970's Warren County’s tourism and publicity office was looking for an idea for an event which would bring visitors to the region after Labor Day. At that time, there were relatively few hot air balloons in the nation. One such balloonist, John Marsden from Manchester, VT shared photos of his balloon with some visionary Glens Falls residents, including Walter Grishkot, and the Adirondack Balloon Festival was born shortly there after.

The early days of the Festival were held at Adirondack Community College, know known as SUNY Adirondack. As the event grew, a larger site was needed to accommodate the growing number of balloons and spectators. That new site was the Warren County airport, where the festival continues to be held today.

The festival is a not-for-profit organization, which is very rare for an event of its size and stature. Funding for the event is raised by volunteers and the event would not be possible without the tremendous community support we receive. For what will now be its 41st year, the event remains open to the public, FREE OF CHARGE

Through the years, the event has drawn international exposure for the Glens Falls region with relationships being formed with cities like Saga, Japan and Gatineau, Quebec. Our event traditionally draws balloonists from across the United States but also internationally based pilots as well.

Today our event draws upwards of 150,000 people over 4 days. We have been named one of the Top 100 events in North America and have received accolades from the Weather Channel, Food Network and media coverage including Associated Press articles as well as New York Times.

After the death of founder Walter Grishkot in 2011, a foundation was set up in his memory to raise funds to promote interest in education in the sciences of aviation and aerospace. Please visit AdkBalloonFestivalFoundation.org to support the Walter Grishkot Memorial Scholarship Fund. Thank you for your donation!

We hope to see you there! 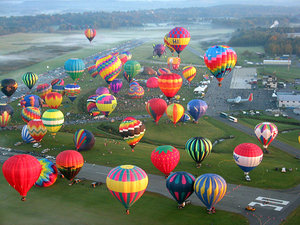 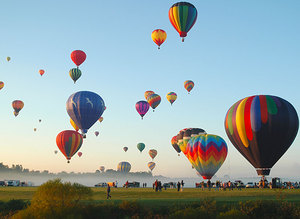 Please use Hicks Road entrance to Airport unless you obtain a VIP parking pass!