From a small gathering of 13 balloons in 1972, the Albuquerque International Balloon Fiesta has grown to become hands-down the largest balloon event in the world. Held each year during the first week in October, the Balloon Fiesta hosts hundreds of balloons and over 1,000 pilots. The first gathering of 13 balloons in 1972 was held in the parking lot of Coronado Center in uptown Albuquerque. The following year, 13 countries took part in the "First World Hot Air Balloon Championships," held at the New Mexico State Fairgrounds. The event had already caught on. By 1978 Albuquerque was playing host to the world's largest ballooning event (273 entries that year alone).

In 1992, the name Kodak was added to Albuquerque International Balloon Fiesta, reflecting the fact that this had become the world's most photographed event. the Balloon Fiesta has literally changed the face of the ballooning sport, each year showing new pilots and owners what thrilling and safe experience ballooning can be.

Drawing entries from more than 28 different countries, the Balloon Fiesta has truly become international in stature. In 2002, Kodak stepped down from being the title sponsor of Balloon Fiesta.

Media coverage originates from more than 50 nations, with live satellite broadcast to Japan and television documentaries prepared by Great Britain, West Germany, the Netherlands and France. In 1995, a one-hour special on the Kodak Albuquerque International Balloon Fiesta aired on ESPN's "Great American Events". "Great American Events" is a series that profiles unusual and challenging events. The Balloon Fiesta was one in a series of one-hour programs for national and worldwide distribution. The Balloon Fiesta was also featured in a one hour special on the Travel Channel.

In 1999 the prestigious Gordon Bennett Cup was hosted once again by Balloon Fiesta. Twenty teams representing twelve countries participated in the 43rd Annual Coupe Aéronautique Gordon Bennett. The Belgian team of Philippe DeCock and Ronny Van Havere flew a distance of 910 miles to win the race, landing on October 5th, south-southeast of Tupelo, Mississippi. Each year, the Balloon Fiesta is organized by a full-time paid staff of less than 12 people, an all-volunteer boardof up to 24 members and thousands of volunteers working every facet of the event 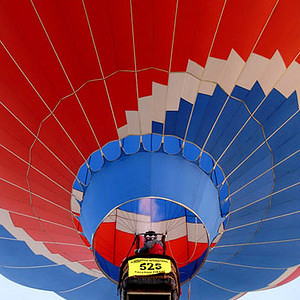