Eyes to the Skies

One of Lisle’s most treasured events, the Eyes to the Skies Festival, will be celebrating its 31th Anniversary in 2013.

Originally the brainchild of Dick Dooley, then Superintendent of Recreation for the Lisle Park District, the event was initiated to mark Lisle’s Sesqui-Centennial in 1982. After a decade of continued growth, the event almost died when the Lisle Park District decided it no longer could assume the financial risk of running the event. The Lisle Kiwanis Club stepped in to save the event but after two years, they too decided the financial risk was more than they could handle.

In keeping with Lisle’s historic volunteer spirit, a group of citizens formed the Lisle Fourth of July Committee in 1992 and have been managing what has become one of the Chicago area’s largest summer festivals ever since. Hank Van Kampen, long-time President of the Lisle Park District, headed the original committee. Other original members included Bill Kubes, Treasurer, and Wayne Dunham, Secretary. Representing the area civic groups were Larry Smith and Dale Rammien from the Kiwanis, Dick Gaddini from the Lions and Tom Althoff from Rotary. Hazel Van Kampen and Joe Maas represented the Lisle community at large.

The event and the committee have grown dramatically since then. More than 300 Lisle residents now volunteer to help the event, which attracts an attendance each year of more than 150,000. Highlights include performances by nationally known musical groups, the best in local band performances, a large carnival, a 100-booth craft fair, a special children’s area, food court and of course, daily launches of hot air balloons and a balloon glow. There’s also an annual Fourth of July parade and a spectacular fireworks show.

The local and national publicity that Eyes has garnered have helped enhance Lisle’s reputation as a great place to visit. The festival has been featured on the Today Show, Good Morning America and on six different segments of CNN’s Headline News. Locally, the festival has been covered regularly by the Chicago Tribune, Daily Herald, Chicago Sun-Times, Sun Newspapers and Reporter-Progress Newspapers. Almost every morning, afternoon and evening news program in Chicago has visited our site in Lisle Community Park.

The Eyes to the Skies Festival has been selected six times as One of the Country’s Top 100 Tourist Destinations by the American Bus Association. It’s been voted Best Festival by readers of West Suburban Living Magazine and named a member of the Illinois Festival Hall of Fame. Hampton Inn named it as a place to visit in its Year of 1,000 Weekends and the Chicago Centennial Flight Commission selected the festival for inclusion in its 12 Events for 12 Seconds when honoring the 100th anniversary of the first flight by the Wright Brothers.

The 4th of July committee, disbanded in 2008 after 27 years. A group of community members who didn’t want to see the festival terminated got together and formed the Lisle Eyes to the Skies Committee.

The Eyes to the Skies Committee, which now puts together the Eyes to the Skies Festival, is a not-for-profit corporation formed in 2009. We will take great pride in creating a wonderful festival each year. Hopefully our event will be a special experience for you and your family. We look forward to seeing you over the 4th of July weekend. Come join us. 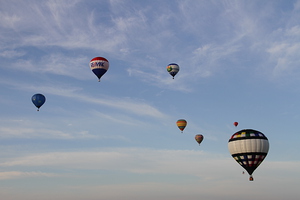 Lisle’s Eyes to the Skies Festival is located in the Lisle Community Park west of Rt. 53, east of Yackley Ave. and South of US-34.