Helen to the Atlantic Balloon Classic

The South's oldest balloon event and the United States' only long distance hot air balloon race will begin (weather permitting) with a mass ascension of 30 bright and colorful hot air balloons, in North Georgia's Alpine Village - Helen. Race competitors and local flyers will take to the sky at 7:00 am, Thursday. If the weather conditions are too windy or storms are forecast, the take off will be postponed until conditions are acceptable.

The people of Helen believe that Helen, Georgia is the center of their world and in Columbus' day the Atlantic Ocean was the "edge of the Earth". Thus, Pete Hodkinson came up with the concept for the Helen to the Atlantic Balloon Race. The race begins in Helen and the finish line is I-95 (anywhere between Maine and Miami). The shortest distance is 225 miles and the race usually takes two days. It has been done in one day, while some races have taken as many as four days. Six to ten balloons will be competing in the cross country race.

It is a race where both the pilot's and crew's skills are challenged. A balloon can only go the same speed and direction as the wind. The pilot must find the altitude which gives him/her the best speed as well as direction towards the finish line. The race becomes a crew event as well, since the balloons are limited to 40 gallons of fuel (propane). Forty gallons is approximately enough fuel to last 4 hours, so the balloons have to land for refueling. If the crew is not there immediately with fresh tanks, valuable time is lost while the pilot and crew try to find each other.

The winner is the first person to cross I-95, or whoever is ahead at sunset on Friday. 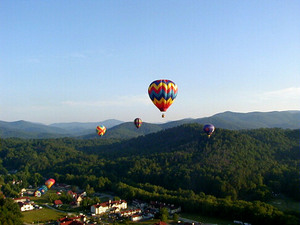 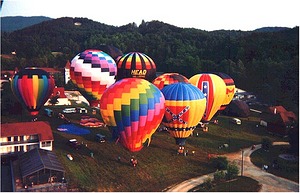